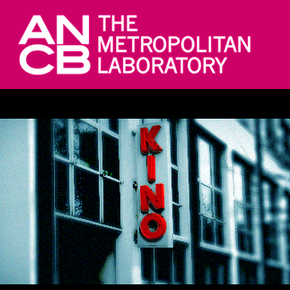 Invitation to Symposium and Design Studio

Cinema of the Future 2013 – Friday, April 19th 2013, 6pm
Cinematic Acupuncture
The Cinema as Social and Creative Catalyst at the ANCB The Metropolitan Laboratory

An initiative by ANCB The Metropolitan Laboratory, supported by Medienboard Berlin-Brandenburg and in cooperation with the project ‚Berlinale goes Kiez‘ by the 63rd International Film Festival Berlin.

Cinema of the Future 2013 is the fourth event in this ANCB series. This year’s focus is on how the cinema, as a local meeting spot, can act as a catalyst for cohesive social change, using the Rollberg Cinema in Berlin-Neukölln as a case study.

Symposium
The symposium will present an interdisciplinary dialogue about the role of the cinema as a social stimulator. Local agents will join specialists from different fields to debate the position of cinema in urban public space with regards to questions such as: How can the cinema reach out to a diverse range of inhabitants in a fast changing social landscape ? How might the effects of a design intervention on the cinema radiate across the whole neighbourhood?

Presentations will be followed by a discussion moderated by
Bart Hofstede, Counsellor for Press and Culture, The Netherlands Embassy, Berlin

The discussion will be in English. Admission is free. Please register at reply@aedes-network-campus.de. We look forward to welcoming you!

Design Studio
The symposium will kick off and inform a week long design studio with the Universidad Europea de Madrid, led by Angel Luis Fernández, and the Dessau School of Architecture, led by Sam Chermayeff. The participants will conduct both on-site research and design work at the ANCB studio space to develop an analysis of the urban context and propose an architectural/urban intervention for the Rollberg Cinema and its surroundings. The central focus of the studio will be: how can architecture and design contribute to the survival of a local cinema in times of ever increasing competition and in doing so activate the surrounding neighbourhood?

ANCB Series: Cinema of the Future
The ANCB Cinema of the Future series encourages a continuous debate about the role of cinema in public urban space in the Berlin region. Since the series began in 2010, ANCB has realised three successful design studios with international architecture students, examining the role of the cinema in the future urban public space of the city in 2010, expanded socio-cultural and socio-economic programmes in 2011 and the future of the independent arthouse cinema as a critical element of the city’s cultural offering in 2012.

For more information on the symposium and the subsequent design studio, please visit www.ancb.de.
Visit ANCB on Facebook.

Partner’s Event
The Whole Earth – California and the Disappearance of the Outside / Exhibition and Conference at Haus der Kulturen der Welt, April 26th – July 1st 2013
The photograph of planet Earth as seen from the outside, first published in the 1960s, became one of the most influential images in history and had a defining effect on the popular notion of the „whole world“. The exhibition, an essay comprising artistic positions and cultural-historical materials, examines the application of ecological-systemic concepts to society, politics and aesthetics and how ecology and cybernetics led to the system and self-management of our capitalist network society. For further information visit www.hkw.de/en/wholeearth.

Cinema of the Future 2013 has received generous support from: Medienboard Berlin